It seems that a certain groundhog had all that business about an EARLY spring WAY off the mark. It’s the end of March here and we just had another 4-6 inches of snow fall on us yesterday. I’ll admit- I’m brooding a bit. I’m usually out and busy in the yard by now; moving plants around, prepping planting beds, cleaning up fall’s debris. Spring seems to have missed that right turn at Albuquerque and maybe has become lost somewhere in west Texas. There were fabulous buds all over my magnolia trees, which I’m not sure will go ahead as planned now. Sigh…

Yes, I’m impatient and I want to get my hands in the dirt, but these late snows may not be such a bad thing. For instance, all those little trees I planted last year- suffered through one of the worst droughts the Midwest has seen in 30 years. A lot of crops failed and left fields bare and exposed to erosion. Drought, especially in soils like clay (which is what I have here) or in areas of high erosion, can leach a lot of nutrients, like nitrogen, from the soil. Plants use nitrogen by absorbing it through their roots and converting it to proteins; a plant in nitrogen deficient soil will often show yellowing of mature leaves. Drought conditions affect plant health and yields in large farms, which also changes the amount of nitrogen removed from the soil and the cover left on a field following harvest. On highly erodible land, farms must leave a certain amount of crop residue to conserve the nutrients in the soil. Tilling the soil can expose the nutrients and good bacteria underneath to the air, light and wind- causing these valuable nutrients to be stripped away. Cover crops and no-till practices can help preserve nutrients, but in a severe drought, it’s much harder for farms in high erosion areas to maintain soil health.
Snow is a great mulch and fertilizer.
I’ve heard several farmers mention this on the local news when asked about the early spring snows and wondered why, so of course I did what I do best… a little research. Snow provides a layer of insulation when temperatures are rapidly fluctuating between freeze and thaw; it keeps the soil temperature a bit more constant. Constantly expanding and contracting soil can be hard on little roots and bulbs close to the surface, which is why gardeners preach the benefits of a layer of mulch. A thick layer of snow acts much like several inches of mulch on the ground. 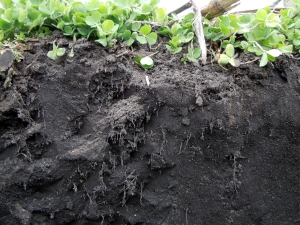 In the past several years, I’ve watched my plants bloom or put out leaf buds early, only to be murdered by one of those vicious, sneaky, late frosts. One year, my magnolias were in full bloom and froze hard. They were still young trees and I feared they had put forth so much energy to bloom that they would be exhausted and unable to recover from the frost. They struggled a bit, but made it through. Snow cover in the early parts of spring, when the danger of a frost is still likely but the days can be very warm, can be a real bud and bloom saver. This is why master gardeners preach mulch, mulch, MULCH! Snow is natural cover, just like mulch. It keeps the ground temperature down, so trees and flowers remain dormant longer and don’t start showing off too early in the season to avoid a killer frost.
Snow (and rain too), pick up nitrogen compounds from the air. Snow especially; since the water is absorbed more slowly into the earth, deposits nitrogen into the soil that is then utilized by plants in nitrogen fixation. Even if the soil is frozen, when it thaws, it will absorb the nitrogen. Nitrogen is what gives a lawn its deep, green color. Farmers have called snow the poor man’s fertilizer, since good snows over their fields improve soil conditions naturally. After this snow finally melts away, we may be rewarded with a spring of especially rich greens and prolific blooms. In the meantime I have my houseplants and tomato and pepper seedlings, which are in need of transplant this week. They’ll be graduating from those egg cartons to plastic drinking water bottles I’ve been saving. Fingers crossed- they’re predicting a warm up to the 60’s next week! Maybe after the yard dries a bit I’ll be able to relieve this cabin fever and start prepping those beds.
Right now, outside my window, it’s snowing. Again.
-B

2 thoughts on “Where oh where has my little spring gone…”