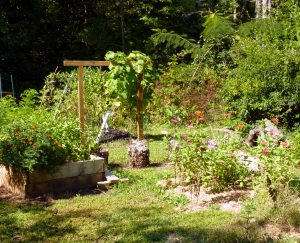 My daughter threw a few zinnia seeds at the end of our driveway this spring, which resulted in a slightly haphazard patch of gorgeousness by midsummer. I mulched her spontaneous flower garden in August to help protect them from drying out too quickly in the horrible dirt they’d been planted in. When we cut away the last remaining stragglers last week, (zinnias bloom forever!) I promised her a much nicer medium for next year’s seeds.
This is my basic recipe for any raised bed I do in our yard now. It’s part hugelkulture mound, part lasagna gardening. Both are just fancy terms meaning I layer a bunch of organic material and then plop some plants in at some point and watch them grow.
I was breaking down a previous very large bed I built nearly 12 years ago, so I pulled rock and small boulders from that to use as a border. Some of my beds are made with scrap lumber, some with purchased landscape blocks. Most of them are rocks from various places on our property- because they are a) free and b) look organic instead of overly formal and contrived.
Build your border out of whatever you like. Just remember you’ll want it high enough to accommodate several layers of material, unless you mound the bed (tall center, near ground-level edges.)
First layer, if you are concerned with underground lovelies, such as moles, should be hardware cloth. Our “soil” here is clay and rock, rock and more rock. I seldom bother with hardware cloth. If you are lucky enough to have wonderful, silty soil, you probably have critters to go with it. Put down hardware cloth, save yourself grief later. (Hardware cloth is not actually cloth. It is a metal grid with holes small enough to put your finger through, but not small enough for rodents to climb through. I’m not sure why they call it “cloth” at all.) 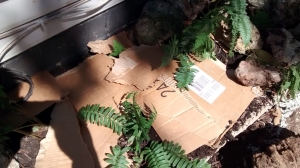 MY first layer is cardboard and/or newspaper. I receive a ridiculous number of catalogs and papers stuffed with ads from every grocery and hardware store within a 30 mile radius… And the occasional phone book. I use them for weed barrier. Worms like this stuff, MUCH better than they like that black weed barrier on a roll crap you get at the garden center. Put a nice thick layer on the bottom of your new beds in the fall, water well, you’ll have 99% fewer weeds to deal with later. I’ve also used cardboard boxes ripped up like in the photo with the ferns at right. Cardboard lasts longer, but it’s harder to place around delicate plants. 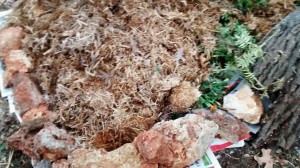 To the newspaper, I add a course layer of twigs, leftover mulch, chopped leaves yard clippings, whatever I have around for drainage. I avoid grass cuttings though, because we have a lot of crabgrass that sprouts everywhere and that stuff is vicious if it gets a foothold.
Over the roughage, I’ll add the actual soil or planting medium. How amended this is depends a lot on what I’m planting. For annual flowers like zinnias or marigolds, native clay with a bit of last year’s compost is usually fine. If I’m planting veggies, I use a lot more nutrient dense mix. I may add blood meal, peat moss, mushroom compost.

By now you’ve probably built things up enough it’s time for the second course of border (if you used rocks). Some people mortar these together or use landscape adhesive. I used it when building the pond and can vouch that it holds pretty well. I just use clay to hold together most of my rock borders. Since our native soil is 70% clay and 30% rock or clay that has turned to rock, it makes great glue when it’s wet. Start the base of your border with newspaper or cardboard to keep weeds from growing up between. Add the first course of rock. Fill your raised bed to the tops of the first level of rock, covering the tops with a bit of earth. The lay the top course over the bottom. If you’re doing this with landscaping blocks, bricks or concrete that you purchased, you’ll need to level each course and use sand/mortar to secure them in place. Rocks are a bit more forgiving. Kids can even sit/climb on the big boulders without damaging the bed.

On top of leftover straw, I added a couple wheelbarrows of burned  up trash from our burn pile. Over this I added 3 wheelbarrows full of native soil. This spring, I’ll add the plants, maybe a little blood meal to give it a nitrogen boost and mulch on top of that. Water each layer well to settle the bed and prevent air pockets.

In seriously weed prone areas, I sometimes newspaper between the plants again, on top of the soil, to keep weeds from taking over between my plants.


The mulch I start as a light layer, then build to about 3-4 inches deep as my plants mature. The idea is to retain moisture and soil nutrient content without smothering your plants. If your mulching material is fine (like shredded leaves) you may need to add to it a couple times a season as it breaks down. 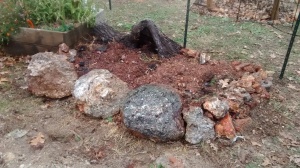 That’s it. Follow that recipe for your raised planting beds and they will be low maintenance and grow very healthy plants for several seasons. As the organic materials break down, you may need to re-layer every 4-5 years or so. On this bed, I’ll eventually have to replace that big stump with rock as it rots… but it looks kind of cool for now. 🙂
Raised garden beds are MUCH easier than raking, tilling and hoeing all season. Healthier for the micro-organisms in your soil and for your plants too!
B