Our little pond project went better this time, (I hope) only a few hiccups along the way and a little flooding problem I’ll have to be addressing before it is complete. I’m going to be doing this in a series of posts, since it’s a rather lengthy process with lots of pictures. And just a side-note: Water-containing things… still not my favorite element to work with.

Since this was my first attempt at a pond that I didn’t just dig a hole and toss the hard plastic liner in the ground, I did some reading online and even checked out a couple library books on pond construction before I started. I ordered a PVC liner, some underlayment and landscaping foam from Amazon.com. I also hauled buckets and buckets of rock from our woods and surrounding yard to the pond site. I didn’t want to have to buy large amounts of stone; I was hoping to keep the budget for this project under $200.  At this point, I was in $49 for the liner, $20 for underlayment, $50 for a pump and $20 for landscaping foam; so right on target after buying a couple bags of river rock and some mulch to finish it off.

The first two days of this project were all about hardscape. I hauled rocks out of our woods, sometimes by the bucketful or one at a time depending on the size. Some of the really big ones I had to just roll out of the woods, since we don’t have a four-wheeler or other mechanical option to get them to the yard. My daughter helped by picking up smaller rocks and pushing a few of the larger ones back down the hill for me. >.<

I thought that I had more than enough rock when I’d finished, judging by the size of the pile I wound up with. It turned out that this was only about HALF of what I actually needed to do the job, so I spent another day during the pond construction rock searching and hauling. We are lucky cost wise that we have such a huge resource of rock available on our site. If you don’t have this kind of rock readily available, be prepared to shell out a couple hundred dollars to have stones of this size and in this quantity delivered to you.

Third day or so was spent digging. I used an old piece of hose laid on the ground to get a general outline of where I wanted the pond to be. I then stuck my shovel in just deep enough to leave a line in the ground around the hose so I had a rough outline of the pond. Since the back of the waterfall was going to butt right up against our sidewalk, I decided to work on that next. I figured the best way to make it stable would be to build it like a raised flower bed. You lay your first course of rock (in this case, cement pavers I had lying around from a previous project) at least halfway buried in earth. 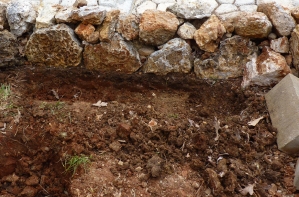 The ground slopes from left to right in this area, so I dug a shallow trench deeper on one side than the other to level the first three blocks in. For flower beds, I would usually just eyeball the level. For this project, I went inside and actually got a level and checked each block for level and then all three of the first course for level against each other. I can’t stress how very important it is that this first course be as level as you can get it. For every little bit the first course is off, the blocks you stack on top of it will be exponentially off level which can lead to a very unstable structure.

I wanted the waterfall to come to the top of the sidewalk, so I stacked blocks 3 high in a pyramid, leaving a few inches for the decorative rock I’d be putting on top. Once I was happy with these later and sure I didn’t want to re-arrange them again, I glued them together with a little landscaping foam.

Now that I had the waterfall base in place, I started digging the pond. This is where I should have done a bit more research, because I made a mistake that is probably going to prove to be a real pain in my butt sometime in the future. I dug out the hole and then went back and built up shelves out of leftover dirt. Our soil is mostly clay, which sticks together and packs nicely, so this was very easy to do.

The CORRECT way to do this is dig a shallow hole for your first layer. Then re-mark the outline of the pond a few inches or so from the perimeter and dig a bit deeper to create a ledge out of undisturbed soil. Then mark a perimeter again a few inches in to create a second ledge of undisturbed soil. Finally, mark your last perimeter and dig even deeper. This is the center and deepest part of the pond where your pump would go.

When you finish it should look like this nice professional picture of the man with his level, which you will note, doesn’t look much at all like the sloppy hole I dug myself. I only put shelves in where I thought plants might sit later. Also, I had this issue with small children in my excavation. If you have a small child in your dig, I recommend you get them out, especially before installation of the rock or liner.

Those first and second layers of shelving in the example pond are not only for plants, but you need them to hold rocks in place that will hide the sides of the liner later. The website I took this picture from is a good example of how to do it right. My dig is an excellent example of what to do if you want to be standing in a pond half full of water later, saying to yourself, “How the hell am I supposed to get these rocks to stay on the sloped sides of this pond?” This was my first major mistake.

The depth of your pond will depend on it’s purpose. If you are only going to put a few water plants in, it only needs to be around 1.5-2ft deep. I kept mine fairly shallow so that my 3-year-old daughter was able to sit on the bottom without the water level being over her head. Had I installed this a year or two ago, I probably would have opted for a pond-less feature with a recirculating fountain.  The current pond is outside the fenced play area of our yard; in other words, it’s in a place where she should never be around it unsupervised. I built our pond with her in mind. It will home to frogs and a few water lilies, but no fish.
If you are building your pond for fish, it will need to be deeper- at least 3 to 4 feet for koi, slightly less for goldfish. Basically, the fish need a place below the frost line where they can hibernate without the whole pond freezing solid. Having fish in your pond may also involve installation of a heater and a pump to keep oxygen circulation going.

I didn’t finish the pond the day I dug my hole. I ran out of steam and time, so I let it set and planned to pick up where I’d left off the next day. Then it rained. A lot.  And I wound up with a

big, muddy hole, ¾ full of water. Did I mention that clay is an excellent medium for holding water? In fact, they make natural pond liners out of clay and a bonding material that you can use to line your pond if you prefer not to use PVC or EPDM liners. It’s more expensive, but can be self-sealing and it’s a natural alternative to plastic or rubber. Large scale farm ponds around here often utilize clay as a pond base to hold the water in.
SO… after it finally quit raining, I went out and pumped and bucket-scooped the water out of the hole so that I could replace the muddy, mucky mess with my nice, clean PVC liner. The fact that the pond held water so well without any liner at all should have told me this would be a problem later. I was oblivious however and continued on, unhindered by mud or knowledge of hydrostatic pressure and ground water tables.
…to be continued…

Life is sometimes hard. Things go wrong, in life and in love and in business and in friendship and in health and in all other ways that life can go wrong. And when things get tough, this is what you should do.