I was recently lucky enough to spend a week at Disney World; we went to Magic Kingdom and Disney’s Animal Kingdom. These people know how to garden! Granted, it ‘s in Florida and it rains practically every day there AND they are working with Zone 8-10 temperatures. Still, I was impressed with their attention to detail and all those little extras they impart into an area to give it a specific feel. One of my favorites was the Asia section of Animal Kingdom. I’ve always wanted to add a few Asian elements to my own garden, but until now haven’t had a clear idea of what to do or even where to begin. The Asian look is definitely more that just bamboo and Japanese maple trees. I picked up plenty of interesting ideas on our trek through the Disney parks and took some great photos. Thought I would share a few of them here.

One of the many flower beds throughout the Animal Kingdom park. I loved the use of color and different leaf textures in this one. 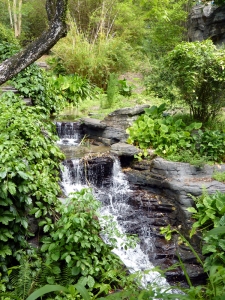 One of many man-made streams throughout the park. This one looks like molded concrete and stone to give it that very natural look of large boulders and cliff drops without actually importing all that rock. Love the plant placement and the fall of the water. 🙂 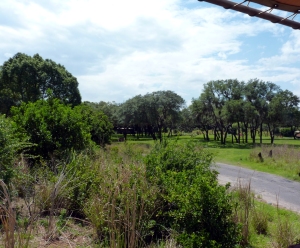 This is part of a man-made savannah on the Safari Tour ride. (Not in Asia section, but Africa) There were no fences in site anywhere. They used natural barriers like water-filled pits to keep the predator/prey animals apart.

One of the lamps lining the sidewalks throughout the Asia section of the park. I’m actually considering trying to make a couple of these. Maybe a trip to the hardware store for some flexible plastic and chimney caps? 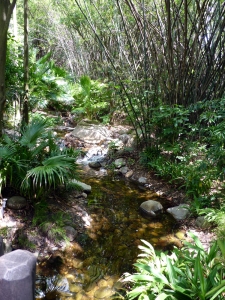 Another stream bed view. I took this one for their use of plant placement; the midsize plantings at the bends in the stream and the tall stand of bamboo as a backdrop.

Rag scraps tied to the branches of a tree. This one I think you’d have to be careful duplicating, or you’d just wind up looking like the weirdo that covers a tree in rag scraps. But if you had the rest of the look in your garden and then added one of these, I think you could pull it off. Loved the movement and color of this in the park, was a major eye-catcher!

Another Asian-inspired lamp. Would be a bit harder to make, but I thought with a router to cut the scrolled wood, it could still be a cool little project. If hollow pipe was used to make the posts, you could wire the light so no wires would show. (I don’t think this one actually lights up)

I’ll post an addendum to this if I actually manage to implement some of these ideas instead of just sharing and thinking about them. If you should try them out, I’d love you to share your photos!
Till later gators,  –==<
Belle

One thought on “Disney Gardening”