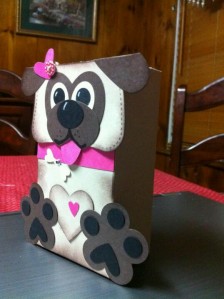 Because people have garden-related VD all the time, right?
In this case, the VD is for Valentine’s Day- or in other words, that day of the year that I now forgo a romantic lunch or dinner dates with my husband for school parties involving preschool crafts, paper valentines and games like tossing bean bag shaped hearts. And I wouldn’t change a thing. Really. No, really.

Ok, maybe one little thing. Like Alice, I often give myself good advice, but I very seldom follow it.
I browsed through Pinterest, looking for creative ideas to spruce up the old Valentine’s box that were a bit more exciting that tissue paper and stickers. My daughter spotted an adorable dog that looked like it was cut out from felt shapes. I clicked the link and it went to a picture. No tutorial. And I was pretty sure that the thing was a bit TOO perfect; maybe a little Photoshop for good measure? Or perhaps that parent had an airbrushing paint gun and a machine to precisely cut all the shapes. I thought that perhaps I should go back and find something else, maybe one that came with instructions, but the child wanted “THAT ONE.” It was decided.

It was felt shapes glued to a box, how hard could it be really?

I realized I only had 5 sheets of felt available, and out of those only 3 colors would work for our dog. No big deal, I have old t-shirts that I’ve trashed in the yard. I hacked up a red one to use for the dog’s collar and accents. I didn’t have nearly enough of any one color to cover the back of the box, so I got some metal pipe tape out of the tool drawer and taped the box up with that. It’s shiny. What kid doesn’t like shiny?
I cut out the shapes and started gluing things on; so far so good. The face and the body all went on without any trouble, the collar only needed minor adjustment. It took me a couple tries on paper to get the heart shape with 3 perfect circle toes for the feet. I wound up drawing the heart shape, then using a water bottle cap to get the circles perfectly round. I used a straight pin to pin the paper pattern to my felt before cutting any felt. I only had one sheet of brown, so I had to make sure I didn’t make ANY mistakes or it meant a trip to Wal-Mart. Which meant I had to shower and put on real clothes, not house clothes. And shoes. And brush my hair. You get the idea.

Feet shapes all cut out, I went on to try and glue the toe pads and hearts onto the foot. The fabric glue claims it will bond any fabric to most other materials instantly, you need only hold it for a few seconds, then let it dry to full strength over several hours. I worked on this box for 5 1/2 HOURS. The glue never stuck. It did dry though; it made the fabric all crusty, it stuck to my fingers. My fingers stuck to the felt, to the box, to the couch, to the table. The felt would not, for whatever reason, stick to itself. So I got out a needle and thread and hand-sewed the pads on.
Then I had to get the feet onto the body. Same problem. The white felt wouldn’t come off the box without tearing. It ACTUALLY STUCK. So I sewed through the box and all and stitched them on to the body.

It went pretty much the same with the facial features, the ears, the little heart (broke my thread and then the needle on that bit) and the bone bow. I sewed it all. I bled. I broke needles. I broke thread. My daughter was supposed to help with this project. She lost interest and wandered off to play computer games around the 11th time I glued myself to the couch.

All in all, even though it turned out to be a lot more work than I’d anticipated, the box didn’t turn out too bad at all. I varied it a bit from the original, with long, droopy ears instead of short ones. I prefer large dogs to purse dogs and the one in the original Pinterest post screams Pug. Ours looks a bit more like a mutt. I added my daughter’s name to the bone-bow so that other parents will know which box to stuff her Valentines in.
I’m very grateful for several things because of this project: I’m glad it’s almost spring and I’ll soon be able to get back to projects that are a bit more to my talent. Dirt, rocks and growing things. I’m glad it turned out as well as it did and that I gave my daughter her puppy box instead of telling her, “Sorry kid, it’s last year’s box for you.” I’ve learned that if you make things without instructions, it might be better to REALLY think things through prior to going at it with the glue. This would have been a project 3 hours shorter, had I only sewn this stuff together, THEN stuck it to the box.

That’s our box, in all it’s glory. And I’ll be sure to post this to Pinterest, so perhaps some other unsuspecting, glue challenged mother may learn from my adventures. 🙂