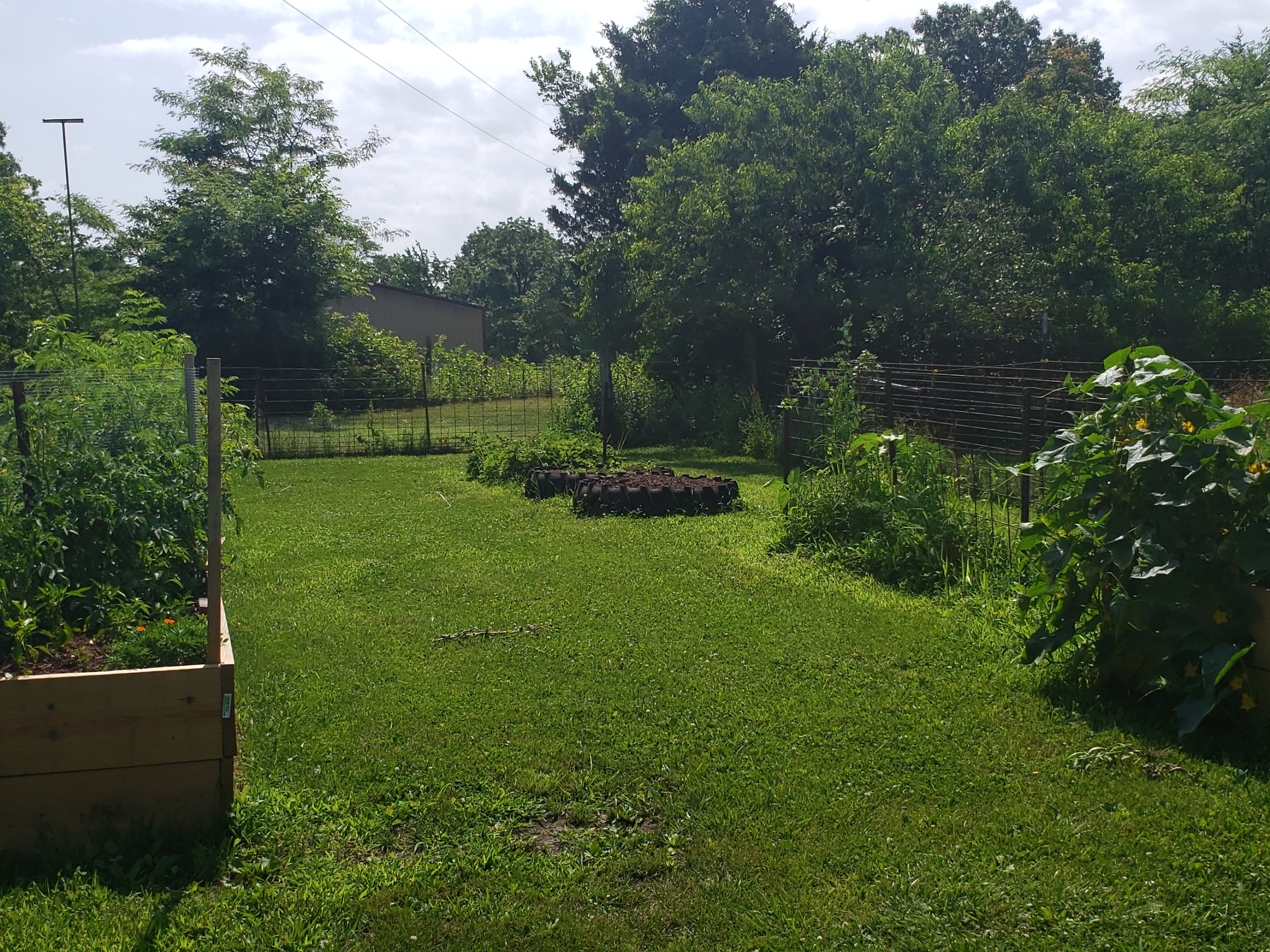 Whew! Ok, so finally caught up to the present.

Jim brought me several massive tractor loads of manure this year. Have I told you yet how freaking amazing our neighbors are? They invite us to stuff, they always seem happy to see us, they let my daughter come hang with their dog and collect eggs from their chickens. Jim brings me truckloads of manure, just because he knows I like to garden. Jim and his wife Sandy have been there for us more times than I can count already. They aren’t just neighbors, we consider them family. They are just amazing people.

So now I had two huge piles of manure. I’d already planned to build some raised beds this year and what better way to get them started…

My plan is to have the garden built in such a way that I only have to run the mower down the walkways and not spend hours and hours weed eating around beds.

Also, there were so many holes in the fence, that the garden was basically a rabbit/ groundhog super buffet. I started replacing fence this spring. I have two sides finished, two to go. It’s a MUCH more difficult job with all the weeds growing, so I’ll probably wait for fall to do the other two.

I framed two raised beds- 8 ft long, 4 ft wide and 4 ft high. Filled the bottom of both with rotten logs, sticks, leaf mould and layered that with manure and rabbit compost. Dirt on top, plants, then mulch. Everything grew SO well, I’m going to have to rethink the trellises in them next year. They’re rather flimsy and just can’t hold 60lbs of tomato plants.

The bed I’d put my tomatoes in the two year’s previous I let rest this year. It looks a weedy mess, but will likely be getting its own raised bed next year.

All three tractor tires have strawberries now. Some June bearing, we added everbearing this year, but I’m going to have to address the birds eating them if we want any for ourselves.

My daughter helped me plant 11 blueberry mounds this spring, so far we’ve only lost 3. We’ve also added elderberry and blackberry all along the front of the garden.

I was spending hours and hours weed eating between the berry mounds though, so I put down landscape fabric over that entire area this past week. It will be getting a truckload of mulch this fall.

In planted gourds and pumpkins this year in-ground but so far I only have two gourd plants, one pumpkin plant and flowers, but no fruits yet. We’ll see… it’s getting kind of late in the season, I’m afraid if they don’t take off soon, they won’t at all.

I have in mind to get herb beds going for next year too, mostly to support my salve making and such, but maybe some to cook with too.

The pears 🍐 took a break this year, since I didn’t thin them properly last year but we got our first peaches this year, so our orchard may need lots of my attention next summer.

I need this garden as simple and low maintenence as possible, ya,’ll. A fact that will only be more true as years go by, since I’m now pushing 50. Four hours of weedeating in 90 degree heat and 70% humidity sucks when you’re 25. When you’re 47, you say to hell with it and just watch the weeds grow.

…or cover them in landscape fabric. I spend a lot more time these days planning how to garden smarter, not harder.

All caught up for now. I’ll try and get some pictures and relay my orchard dramas soon.