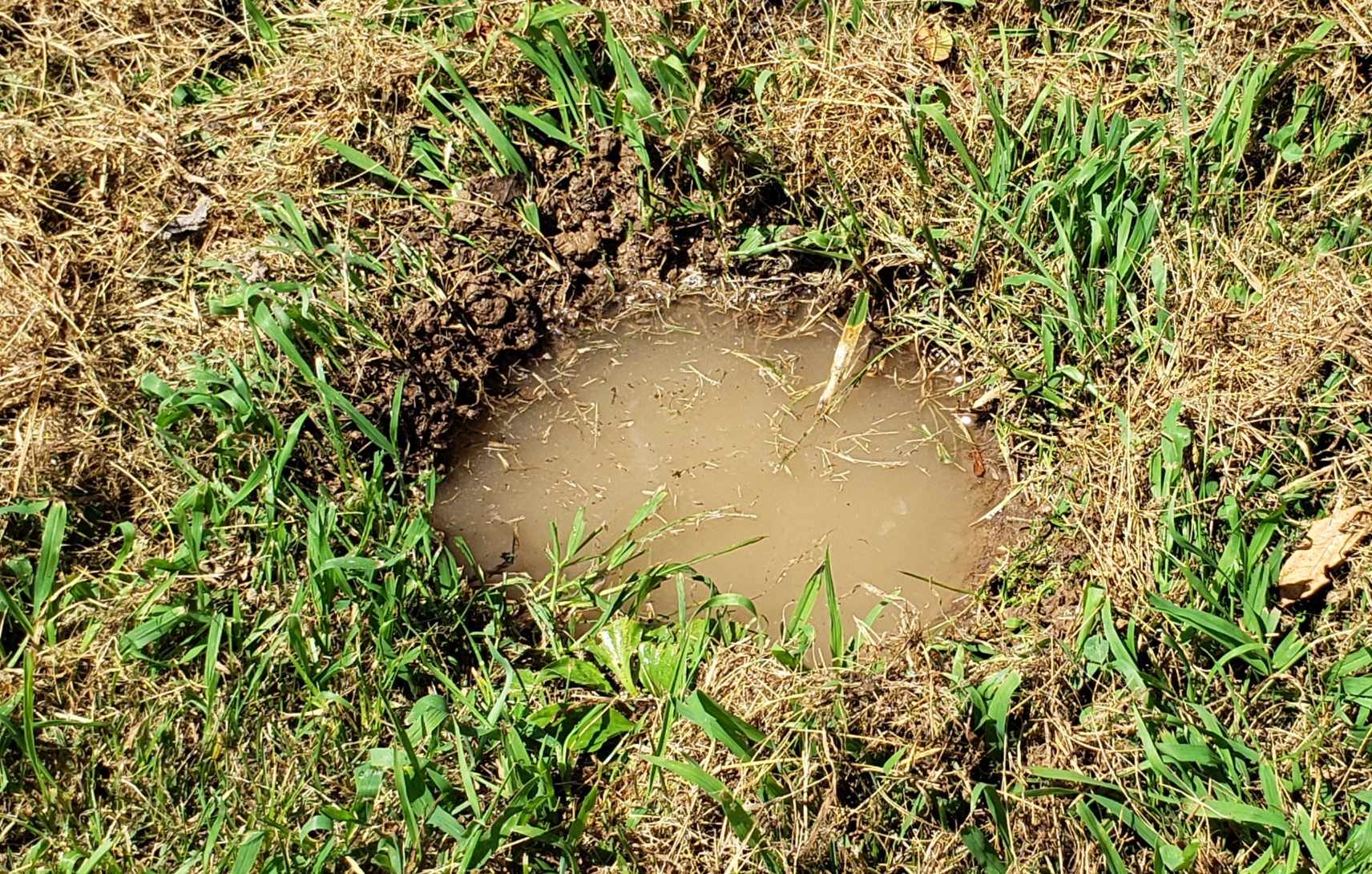 We’re now into that part of summer in Missouri where just stepping out of the air conditioning onto the front porch is like walking past the mouth of Hell.
Ok, I may exaggerate a bit, but July and August here can be insanely HOT.

When I lived at Lake of the Ozarks, I often found it funny how tourists from Texas, Arizona and New Mexico would complain about how hot and sticky our summer’s were, when they routinely saw temperatures upwards of 100’s in their own states. However, Missouri can easily compete with several of the southern states in terms of humidity. I think it’s all the vegetation here, it holds humid like the Amazon jungle.

So my point is, it’s hot. That means all attention in the garden now shifts from planting new things to just trying to keep the things I’ve planted alive. Every year I have the same conversation with my husband about this time.
Me: “I’m not buying a bunch of trees next year, there’s just too much to take care of!”
Tom: “You say that EVERY year. Then you order 50 more trees from the Conservation site.”
Me: “I know. But they take hours to water, this is just ridiculous.”
Tom: “You say that too.” To which I usually give a non-committal grunt and go back outside to haul more water buckets. He’s right, I know he’s right, but when those plant catalogs show up in my mailbox every fall and I’m already longing for spring before fall even really sets in, it’s hard not to get the trees and worry about the repercussions of my impulse plant buys later.

My biggest disappointment is that after all that work to get the trees and get them in the ground, it’s hard to keep them all alive until they get deep enough roots to mostly fend for themselves. New trees need consistent watering- at least once a week during normal rain, maybe every other day to daily during the hot, dry months of summer that we’re in now. I have trees scattered over 40 acres worth of land, so as you can imagine, I don’t have enough watering hose to reach them all. Our orchard is currently without a water-source also, so that leaves a lot of water bucket hauling all through July/August and sometimes September.

My second issue is our soil. The Farm at least has topsoil, which I didn’t have at our Lake house, unless I put it there, but dig down more than 6-7 inches and there is still clay. It’s deep clay with blessedly little rock (the Lake soil was layer on layer of rock), but still clay. I have yet to get a cherry tree to survive in this stuff. I’ve tried building the soil up so they get better drainage, I’ve tried adding composted material, manure, etc. to loosen up the clay. They do well for a bit, then just wither and die. Cherries apparently need their roots to be able to breathe well, they are not fans of dense, compacted soils.
Clay can be a blessing and a curse. It is usually not lacking in nutrients because it holds them in place, rather than letting everything just run through as sandy soil does. Conversely, it can turn to concrete when it dries out, making it near impossible for small, fragile roots to push through. It can also hold water TOO WELL, turning the ground into a boggy, sticky mess that fragile roots drown and suffocate in. Hence my cherry tree drama. I could just content myself to buy less picky trees, but that will never happen.

The cherry dilemma distracts me. For my less picky baby trees, I’ve found a way to use the clay to my advantage. It was a bit more work in the beginning and won’t keep me from having to water at all, but hopefully will cut down on the frequency of having to haul buckets and improve the survival of those tiny little trees.
Mulch helps. I can’t preach the benefits of mulching plants enough. It holds warmth during the cool months, keeps roots cooler in the hot months, retains moisture, blocks weeds and some mulches improve soil condition as they break down over time. If you’re going to spend money on something in your landscape, spend it on mulch.
It helped my little trees some, putting down weed barrier and mulch.

Still, every time I hauled buckets, I had to pour a little of the water near the roots, then wait. Pour a little more, then wait. Clay soil doesn’t immediately absorb water. It soaks in VERY SLOWLY, so if you just dump the bucket of water over your plant, 90% of that water is going to run off where you didn’t intend it. Soaker hoses are great for clay, but that’s if you can get a soaker hose to that spot.

An armadillo dug up one of the new redbuds I’d planted down by our pond. Luckily, the little tree didn’t die (redbuds are TOUGH), but even after I re-covered the roots, there was still a substantial dip in the ground next to my tree. I dumped the water in the hole and noticed something. The water filled hole drained very slowly, held a lot of water and was still slightly damp the next day when I went back to make sure the tree hadn’t been dug up again. I had a new willow that wasn’t getting enough water, so I dug a hole next to that tree too and filled it with water. A couple weeks of that and the willow was looking MUCH better. I also noticed the redbud that the ‘dillo had dug up was looking fantastic, while a couple others I’d planted were either dead or barely hanging on.

In clay soil, these little holes were acting like a well. The clay held the water in place for a long time, allowing it to s-l-o-w-l-y filter down to the tree’s roots, instead of 90% of the water running off down the hill. Our farm ponds were built from packed clay bottoms. Eventually the clay particles pack together SO well with all that water weight on top that the water stops seeping through altogether and POOF! You have a farm pond.
All of the baby trees I’ve dug wells next to have improved. With mulch added, I may only have to water them half as much, even here in the mouth of Hell.

The holes I’m digging aren’t super deep and I’m mostly doing this on trees less than a year old. However, I did add a couple holes near our peach trees, which are 3-4 years now. If you DO add wells next to older trees, be sure to dig at the edge of the root-line. As a general rule, the roots of a tree will reach out at least as far as it’s canopy spreads. I dig just outside the shadow it makes on the ground. If you dig into the roots, you can risk damaging the tree or introducing insect damage or fungal diseases.
I put the shovel into about 7-8 inches or so and pull out a clump of earth. The resulting hole will hold about 2 gallons of water. It takes 15 minutes to an hour for mine to completely drain if it’s really dry out. Once the clay absorbs some water, it will absorb more water faster, so if I’m in a hurry I make a second pass on slow draining holes.
With wells dug, I don’t have to slowly pour water at the root of the plant and wait for it to absorb, I just fill the well and move on to the next tree. It cuts my watering time WAY down, which means a lot less time in that headache inducing heat.

Now if only I can resist the impulse when those tree catalogs arrive this fall…. 🙂