My seed packets came in the mail today that I ordered a little less than two weeks ago; soon it will be time to get some of these plants started indoors.
Most seed companies like Burpee, Gurneys or Burgess are fairly first-time-gardener friendly in that they print planting and care instructions on every seed packet that they send out. You can often find additional information on their website for specific planting information in your growing zone  ( Link is to basic explanation, map to follow below). I live in North Central Missouri, most of which is in Zone 5b; however, the Lake Area is in a micro-climate area of Zone 6. This is according to the older maps; sometimes the newer maps show all but the northernmost part of Missouri in Zone 6. What this means in layman’s terms is that in Zone 6, my garden should be safe from a hard freeze by mid-May.

I was surprised at the amount of misinformation I found about seed starting on sites like Yahoo Answers. I followed the question, “When should I start my tomato seeds indoors if I live in Zone 6?” Several people, professing to be garden centers and/or professional gardeners advised this person NOT to start tomato plants indoors, but to wait until they could be planted directly in the garden instead. One of the responses actually read, “Don’t plant them indoors because they are incredibly likely to die. What you want to do is plant them outside in mid-May to early June when lots of sunlight is available.” Another answer advised them to wait until July! Seriously folks, that’s a bit ridiculous.
Yes. Tomato plants need a lot of light. If you aren’t lucky enough to have a big bay window with sunlight for 8-10 hours a day like I am, then you may need grow lights to supplement your seedlings. Without enough light, the plants will become leggy, which means the stalks will be spindly and they’ll fall over a lot. Tomato and pepper plants need about 8 weeks to germinate. Most seed companies will recommend you start them in sterile planting medium, like those pete flats you see in garden centers this time of year. Last year, I started mine in milk jugs, then transplanted to 16 oz. plastic water bottles with the tops cut off. I used ordinary potting soil. I put them on trays in the window and watered them whenever the top was dry to touch or when I could see that the soil looked dry partway down. The nice thing about clear plastic containers is you can actually SEE whether the soil needs water or not; another advantage is that you can see the root growth on your plants. They were the perfect size for giving a couple plants away to family also.
I also saw a suggestion on Pinterest to use toilet paper tubes stuffed with soil. The pin claimed that you could plant these directly in the garden since they are biodegradable. I haven’t personally tried this out yet, my concern with it is that that the tubes would start to fall apart before you were ready to transplant them and you’d have a mess. Maybe if you stuffed them close together in a shallow plastic crate (as they were shown in the pin photo) and were careful not to overwater…

This timetable for starting indoor seedlings will allow about 8 weeks for seeds to germinate and for your plants to reach a good transplant size before being moved to the garden.

Tomato seedlings will emerge in about 7-10 days. Most peppers take longer, about 10-21 days. Some of my peppers took so long last year, I was beginning to worry that the seeds were duds and weren’t going to do anything. Then they took off and caught up to my tomatoes in a week. Onion sets should be started indoors now through mid-late February. You let these grow to about 5-6 inches tall, repeatedly cut the tops to about 3 inches until they are ready transplant; the cutting will help strengthen the root and health of the onions.

This map shows the hardiness zones and projected last frost dates for most of the United States. 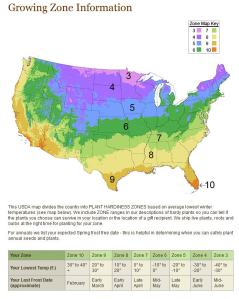 Not all seeds should be started indoors and transplanted like tomatoes and peppers. Some should be direct-sowed in the garden; again check the labels on your seed packets for best planting times. Crops such as broccoli, most lettuces and greens, carrots and onions can be started in early spring in your garden, so long as the soil is workable. These plants benefit from the cool nights and are harvested before the warmest part of the summer season, they are early summer and late fall crops. I’m going to start half of my seeds in mid to late February and save the other half for August/September for a fall crop. Both lettuce and broccoli plants will bolt when the sun gets hot. Bolting means the plant is getting ready to flower; this often changes the flavor of the plant when it forms the flower stalk and makes it no longer edible. Some lettuce varieties are described as “Slow to bolt,” which means they will last longer in warm weather.  Most carrot varieties can also be planted early, when danger of heavy frost has passed.

For crops like cucumber and corn that are direct-sown, Zone 6 gardeners are probably safe to plant in early to mid-May. I started my cucumbers last year before we went on vacation, which was the week of May 8th. When we got back from our trip, I had plants!  🙂
Melons and squash can also be planted in Zone 6 in mid-late May through June. Beans and peas should be started in June/July when the soil temperature is warm. This is also when you should plant your heat tolerant herbs like sage, thyme, oregano and basil. If you stagger your bean plantings every couple of weeks through August, you can have beans well up until frost. This will also help spread out the yields, so you aren’t overwhelmed with tons of beans at once.

September plantings of garlic will be ready to harvest in the coming spring. Spinach is also a great plant for September that loves the cooler weather up until hard frost. This is of course, a very generalized overview. I’ll be posting some articles on specific plants and their care soon, along with some things I’ve tried that have worked out well. Even though it’s snowing today and the wind chill is around 10F, I’m still getting the gardening bug. I’ll post photos of my flats when they are started and in their sunny window.
-B

2 Comments on “Gardeners, Start Your Seedlings!”